Photographing in low light scenarios like a sunrise or sunset may be difficult enough, so what happens when you try and photograph from an airplane during a sunset flight over Toronto? 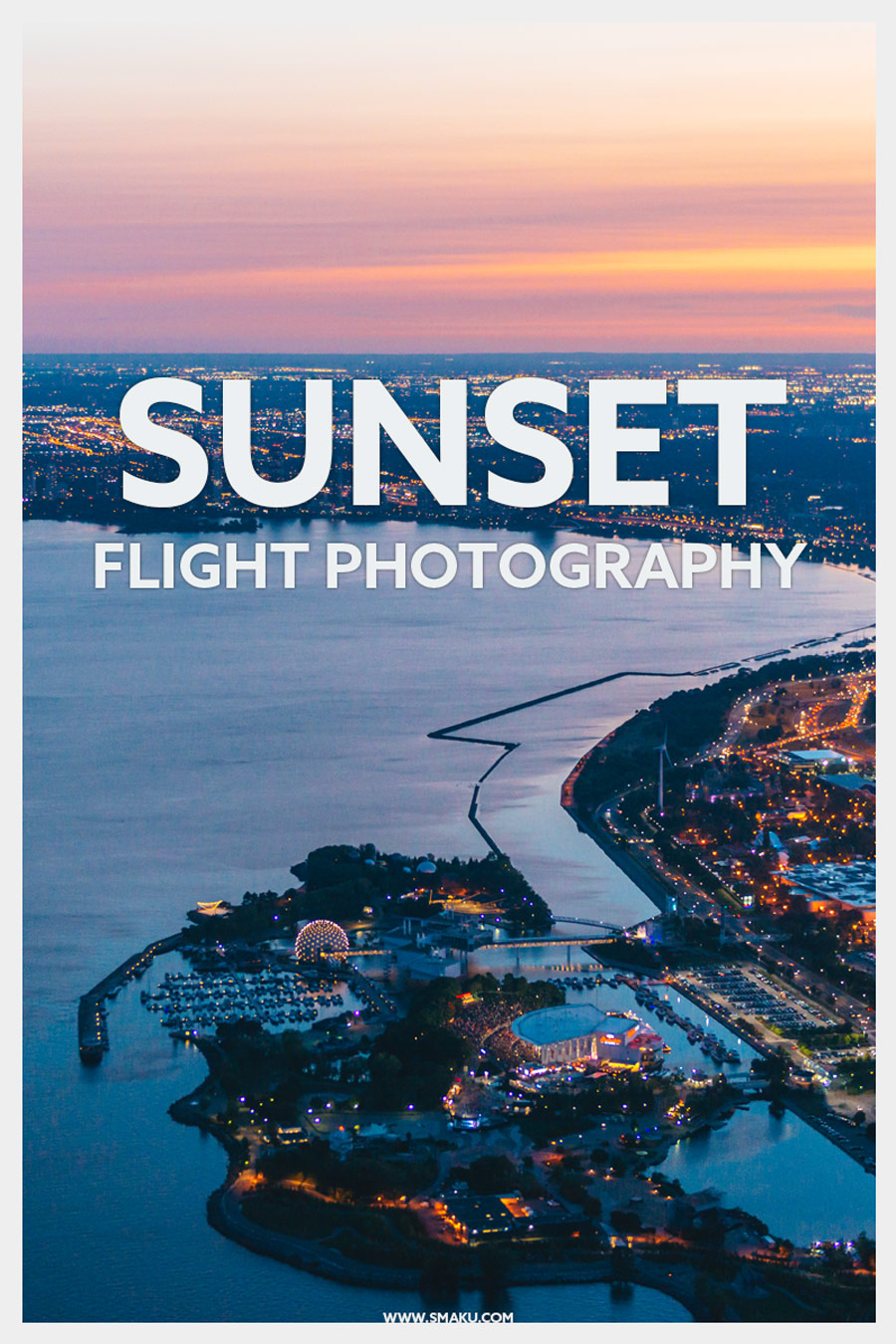 I found this out in my last flight over the downtown core with FlyGTA. I’ve received a number of questions on what my settings were when I shot certain photos so I hope to go through all of them in this post. If you have additional questions, please feel free to comment on this post below.

Time of day will dictate how much light you have going to your sensor. Taking photos from an airplane will be much easier when you have more light available, so consider this when you decide on when to go.

Flying over the city during the day (above) provides enough light for a fast shutter speed. In contrast, shooting in the evening (below) will require a higher ISO and/or shallower depth of field to achieve the same shutter speed.

My last flight was supposed to be a flight over the downtown core shortly before the sun was to set below the horizon. However due to various circumstances, our flight time got pushed back and we ended up flying well past this time.

The sun had already set a while before we went up in the air, making our flight more of a blue-hour session. This may make things more difficult, but it also makes things more interesting. Why? Because at a certain point in the evening, the city lights will have turned on, making the landscape even more colourful to shoot.

I wondered about this too before my first flight, since I had no idea how close we would be to any buildings, the CN Tower, or anything else.

I opted to bring my 24-70mm f/2.8 zoom lens, and my 20mm f/1.8 wide angle lens in case I wanted to capture the huge expanse of land you get to see while you’re up there. During another flight, I took with me my 70-200mm f/2.8, which enables me to capture objects further away, or closer objects in more detail.

For a sunset flight, you’ll want a fast lens (lower f-number) since you will need to open up your aperture to get in as much light as possible. Keep in mind though, that if you want an entire building in focus from the top to somewhere near the ground, you’ll probably want to use a higher f-stop like f/8 or f/10, forcing you to boost your ISO higher than you may want.

Great lens if you want to capture the large expanse of land or water that you can see from above. Keep in mind since this covers a wide angle, you will more than likely catch the wing in your photo too. If that’s your intention, that’s fine—otherwise you’ll need to crop it out afterwards. With a wide angle lens, objects will be much smaller in your photo as well.

This is probably the optimal lens to use in this case as it’s the most versatile. You have plenty of room with your zoom, and it’s a fast lens at f/2.8. If it’s only one lens you carry on, I would recommend this lens.

This is another possible lens to use, but it’s very limiting because you see everything so close up. Use this if you’re after the details of the city in the sunset. For me, I would find it too limiting within a city environment, which is why I left it out of my bag during my sunset shoot. When I flew over a wide expanse of farmland and water, however, I found this lens to be more useful.

Camera settings will vary depending on the available light. As a general guideline though, for a sunset flight over the city, you’ll need to keep your ISO high and shutter speed fairly fast.

The best way to figure this out is to see the photos themselves. Let’s take a look at the following photos and settings to see what happened.

During my flight, I didn’t change my ISO value of 800 simply because it would have taken me too long to change the value back and forth depending on my scene. I paid the price because of this, as you can see.

What could I have done? I could have set my camera to auto ISO to a maximum value of 800 or even 1600. Then with my shooting mode set to shutter priority and shutter speed to about 1/200, my aperture and ISO values would be constantly changing depending on the scene in front of me. I would have achieved better results this way.

Many of these photos were still brightened up in Lightroom afterwards to keep the shadows from being too dark.

You can have a lot of fun with composition inside an airplane. It’s not something you normally see, so take advantage of the fact that you’re there and use what is there to your advantage.

Shooting without a window between our subject and lens would be the ideal circumstance since windows will lower the light coming in, have scratches that may get in the way, and almost certainly will produce reflections in the evening. However in this case, we had to manage with what we were given.

Our first instinct is to shoot out the window to get a clear shot of the outdoors. However, an equally pleasing composition might be if you were to include the window in your photo, which evokes a feeling of being right there inside the plane. Try it out next time and you’ll see.

Someone else in the plane with you? Feel free to use them as a subject in your photo (granted they are OK with it). A wider lens will enable you to get everybody in the plane.

Taking a picture of them as they take a picture of the outside can be interesting if creatively done—just remember to expose for the brightest part of the subject, which in this case was the screen on the phone she was using to take the picture outside.

Or if you’re celebrating a special moment, don’t forget to capture that with the city in the backdrop.

Sometimes you have no choice but to include the wing, or part of the wing in your photo. If that’s the case, try focusing on the wing and have something interesting in the background. In the photo above, although the CN Tower and Rogers Centre are blurred, you’re still able to recognize the two iconic Toronto structures.

And finally, you can’t forget about the pilot and dashboard. The latter lights up at night, offering a great subject matter as well. In the photo above, I let the dashboard lights and sunset lights take centre stage while keeping everything else darker.

There’s lots of opportunities for creativity when you’re up there even though the light may be dim. Be mindful of your settings and be creative. If you have any other questions, or want to offer some more creative ideas, please feel free to comment below and let me know your experiences with a sunset photography session inside an airplane.