Every now and again I come across art exhibitions that really make an impression on me—Yayoi Kusama’s Infinity Mirror earlier this year being one of them. When I visited the nation’s capital on Canada Day, I took a trip across the Alexandra bridge to Gatineau, Quebec where the Mosaïculture Gatineau 2018 exhibit was being held. I didn’t know what to expect from this exhibit at first, but as I made my way to the park, parts of it revealed itself and I knew I was in for something exciting.

Mosaïculture Gatineau 2018 is developed by Mosaïcultures Internationales de Montreal, a non-profit organization, which has showcased various exhibitions around the world and has won many awards. This exhibit was first shown last year at MosaiCanada 150, for Canada’s 150th birthday. This year’s exhibit though, features 45 spectacular floral pieces (10 more than last year), with their mission to “astonish and amaze” their patrons, along this “magnificent journey,” which just happens to be this year’s theme. While admittance was free last year, there is an entry fee this year—follow the link at the end of this post for full details. 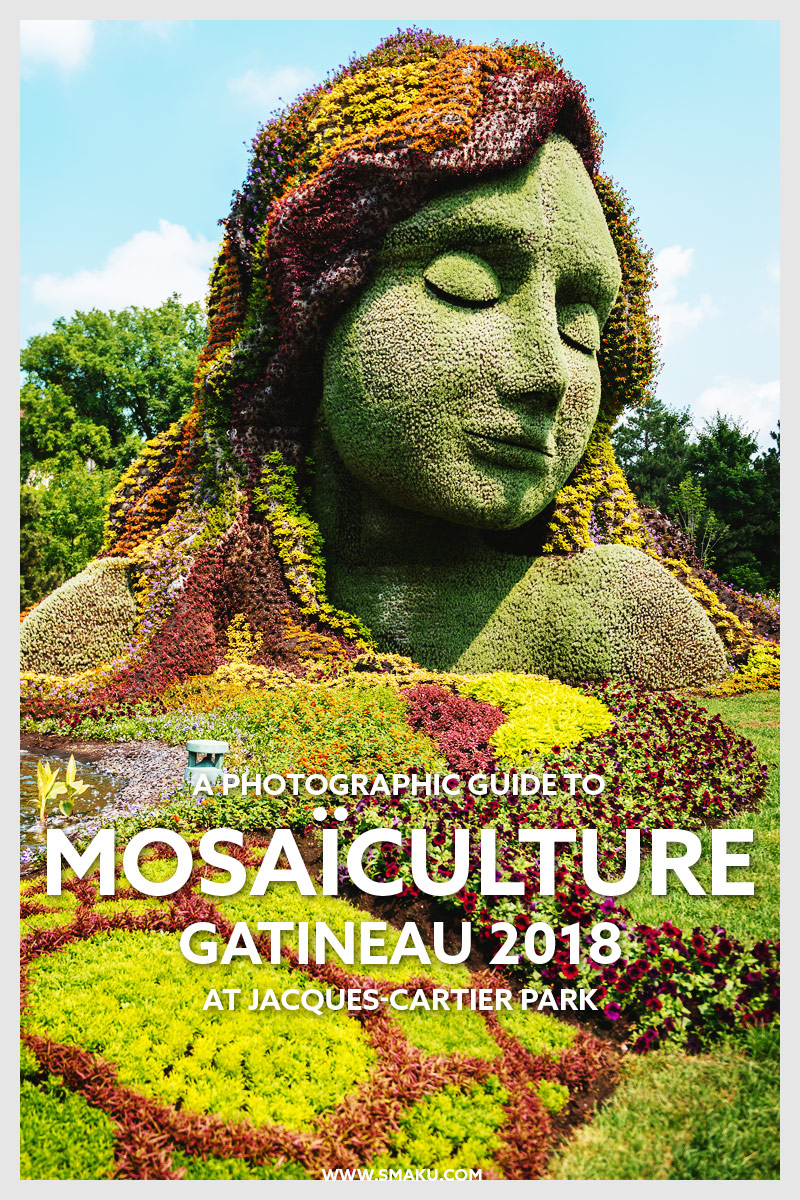 Each artwork can take upwards of six months to make, and it shows. The careful attention to detail the artists put into each piece is evident.

The exhibit does a great job playing with your emotions. I love how you can feel what the artists meant to disseminate with their piece. The facial expressions and subtle nuances given from some of these evoke a sense of peacefulness just by looking at them.

The quiet expression of Mother Earth with the water falling from her hand moved me as soon as I came to her, and the playful expressions of the children playing in the lion dance exhibit really brings out the happiness of it all.

I found even the human-like expressions given to the animals were so relatable and peaceful that it made for a great walk in the park—the mother and child fox piece comes to mind.

Even the individual animals that were part of Mother Earth provided a sense of serenity when viewed by themselves.

Moments of action carefully depict the right time to evoke that sense of freedom.

Even the roaming buffalos gave off a commanding presence.

To add to the experience, music plays softly in the background allowing you to really get into the pieces—each section having their own soundtrack makes the experience even better.

The exhibit is made from over 5.5 million plants, with each different type displayed to the public in their own showcase of sort, by the exit. As the exhibit progresses, the plants will mature and colours of the flowers will become more vibrant giving off yet another different feel to each piece. In the autumn, early morning fog can roll across the park giving an ephemeral feel, ensuring patrons that no matter when you go, you will be sure to get a great experience.

The Mosaïculture Gatineau runs until October 15, 2018. Located at Jacques-Cartier Park, it is just across the Alexandra Bridge from Ottawa.

For more information and to purchase tickets, head to their website.

Although I didn’t catch the name of each piece, I did photograph most of them. See the gallery below for the full set of my photos from this exhibit. Click on any photo to enlarge.