My previous post took you through the wonders of Peggy’s Cove in the early morning light. This post will take you through another must-see area of the Southern coastal area of Nova Scotia: Lunenburg.

A drive around the southern coastal region of Nova Scotia wouldn’t be complete without going to Lunenburg—a UNESCO World Heritage Site—so we decided to make this our destination for that evening’s ride. A direct drive from Peggy’s Cove to Lunenburg should take about an hour and a half, but when I’m in a new place with camera in hand, that time stretches to more than double. 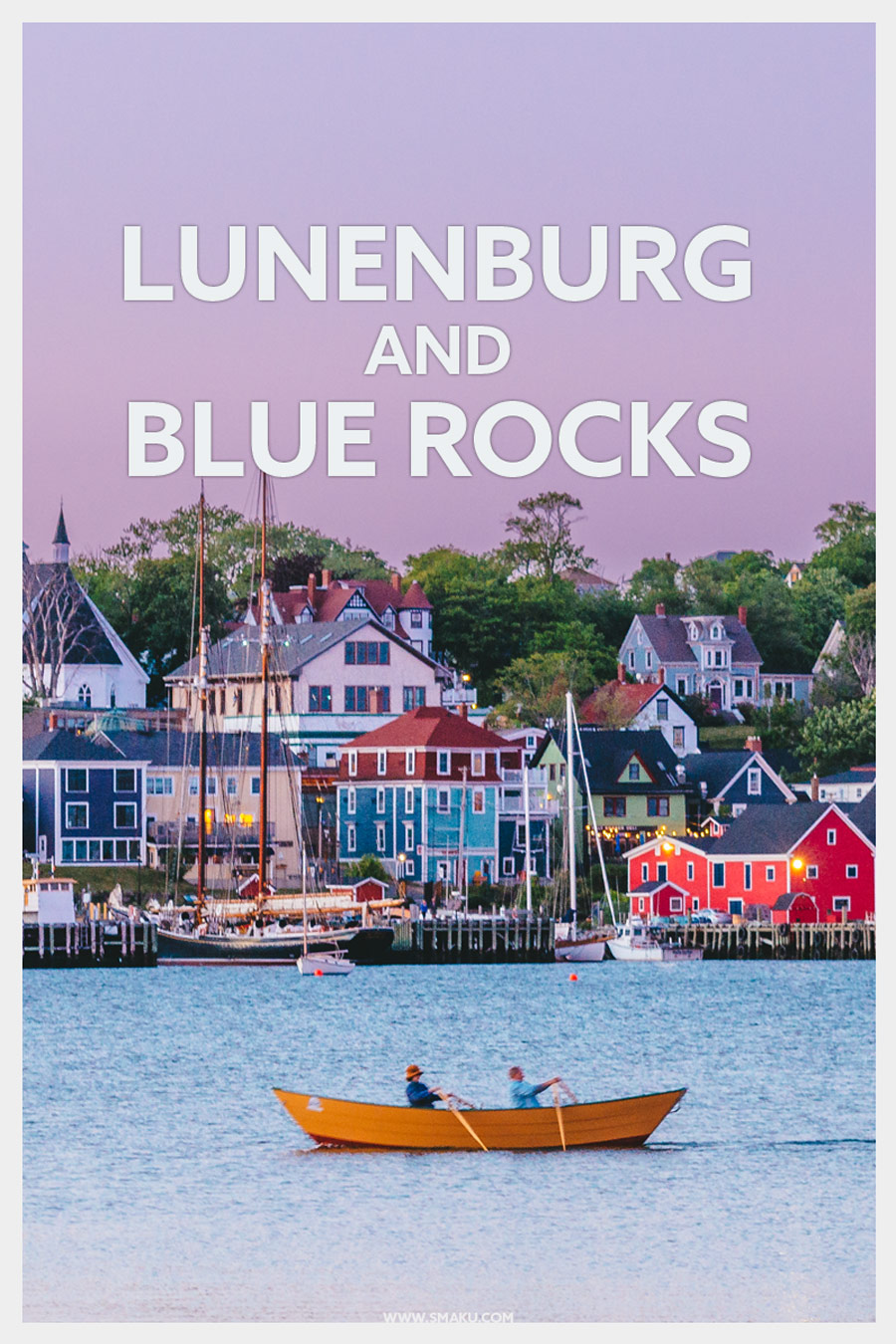 Driving along the Lighthouse Route (Route 333), I took several detours to all the coves that lined the shores. Every road we drove on would lead to breathtaking scenery that we would have loved to have ourselves on a daily basis.

While we admired the many views going north on Peggy’s Cove Rd., I enjoyed the loop around Hwy 329, off of Hwy 3. It does add a little more time to your drive to Lunenburg, but when you’re in Nova Scotia, I consider the drive as part of my experience there.

Whichever name you go by, there’s no doubt these flowers are very picturesque.

They grow wild all over the province and offer so much colour to any landscape. Pink, purple, light pink, and light purple, you’ll see patches of them as you drive along the highway, making driving so much more enjoyable there too.

Apart from the Lupins, there were other flowers that made for great foreground elements.

The three churches in Mahone Bay is another popular stop en route to Lunenburg, and is quickly becoming one of Nova Scotia’s iconic views.

It’s a charming little costal town and a great place for a break. We arrived there shortly before 5pm, so we had to hurry in through the many quaint shops before they closed. A quick stop at Lahave Bakery for a delicious cup of cappuccino satisfied my coffee craving.

Shortly thereafter though, we left to go to Lunenberg, since we wanted to eat dinner there before sunset.

The UNESCO World Heritage Site of Lunenburg is a beautiful port town that is home to the world-famous Bluenose (now Bluenose II), Nova Scotia’s sailing ambassador. I knew I wanted to spend some time here, just wandering around the narrow streets, and to admire the architecture and harbour.

Hunger may have got the better of us though, as we walked from one seafood restaurant to the next, looking at their offerings. We opted for the Savvy Sailor Cafe because of the one dish.

The scallop sandwich, which was what we were looking for, was a hit. Both a unique offering (never had scallops on a bun before!) and tasty, it was a perfect match.

We had a great view of the port and Bluenose II, which happened to be in town that week.

After dinner, we headed over to the other side of the bay area to the entrance to the golf course, where we were told by a few people that it offered one of the best views of the Lunenburg harbour. We stayed there for the sunset that evening just enjoying the moment. The sunset wasn’t anything spectacular but we did have a nice subtle showing of purples and deep blues in blue hour.

Looking over to my right, I see some great golf-green lawn which contrasted nicely with the purple skies.

Blue hour at Lunenburg looks the best when seen from the opposite side of the harbour, and when the lights at the harbour turn on.

A wider angle shows the entire harbour at blue hour.

I had the grand idea of going out that evening to do some astrophotography. Since we opted to stay in Blue Rocks—a 7min. drive from Lunenburg—we were in a prime location away from the village lights. After taking in the sunset, we went back to our Airbnb (which by the way, was very nice—see below), cleaned up, and then just instinctively got ready to retire for the evening. My astrophotography idea had just vanished into thin air as I was too exhausted from the full day’s events.

Not catching the stars only means one thing though—we woke up around 4:30am to catch the sunrise at the point at Blue Rocks. As I peered out the window of my Airbnb after waking up, I saw the sky was a burning red. Excited to see this even more at the point, we hurried our way there. A short 4min. drive away, we came upon the most vibrant sunrise we had seen in our trip.

The picturesque point painted with the beautiful sunrise offered the perfect subject for any photos, and I was happy to be there soaking everything in.

Jumping from one spot to the next, it was brilliant wherever I looked…it was honestly hard to stay still!

The boats anchored in the bay, the fishing huts perched afar, the rock formations, and that vibrant sunrise all made for one exhilarating morning.

The various stores dot the Point at Blue Rocks.

I love the unique look of the fishing boats here with the taller bow (front) and shorter stern (back); it’s something you don’t see too often in Ontario.

More boats seen with the brilliance of the sunrise.

Taking a drive along the shores of Blue Rocks after the sun had risen was also a very refreshing way to start the day.

Afterwards breakfast, we headed back out to Blue Rocks where we rented kayaks for a few hours and enjoyed the calm waters of Millers Pass.

The area is known to be one of the best places to kayak in Nova Scotia as its suited for everyone from the beginner to the experienced paddlers.

So where did we stay? It was the perfect location for a quiet getaway with some of the best views to be had. I opted to stay away from the village of Lunenburg just to experience something new. Since Blue Rocks offered some great views, and was close to Pleasant Paddling, it was our ideal location—I wanted to go on a morning kayak trip so the proximity to the Point was ideal for us. I later found out that Blue Rocks is considered one of the best kayaking destinations in all of Nova Scotia, which is just icing on the cake!

The airbnb is a small but charming place, and the owner—who also stays there—is a very welcoming and friendly individual. She had renovated the entire house herself, and tends to her beautifully decorated garden that is a great place to relax in as well. While you share the home with the owner, the guests get their own bathroom.

Breakfast is included in this airbnb, and for us was some very tasty homemade granola and sweet potato muffins, with yogurt, fresh fruits, juice, and coffee. It was more than enough to get our morning started, not to mention very good. The only unfortunate part of breakfast was we ate too much of the granola that we didn’t leave space for the muffins.

Without a doubt, I would recommend this airbnb for those looking to get away from the village, and connect with nature.

Have you ever been to Lunenburg and/or Blue Rocks? How was your experience? I would love to hear about them so please feel free to comment below and let me know what you did!