Mobile photography has become so popular within the last few years thanks to the advances in the technology mobile devices use. With iPhones spitting out billboard-worthy photos, there seems to be an ever-growing trend to see which mobile device can capture the best image. Using just the device, however, may have its limitations—and that’s where the accessory industry comes into play. With so many options to choose from though, how are we to know which one is worthy of your money? 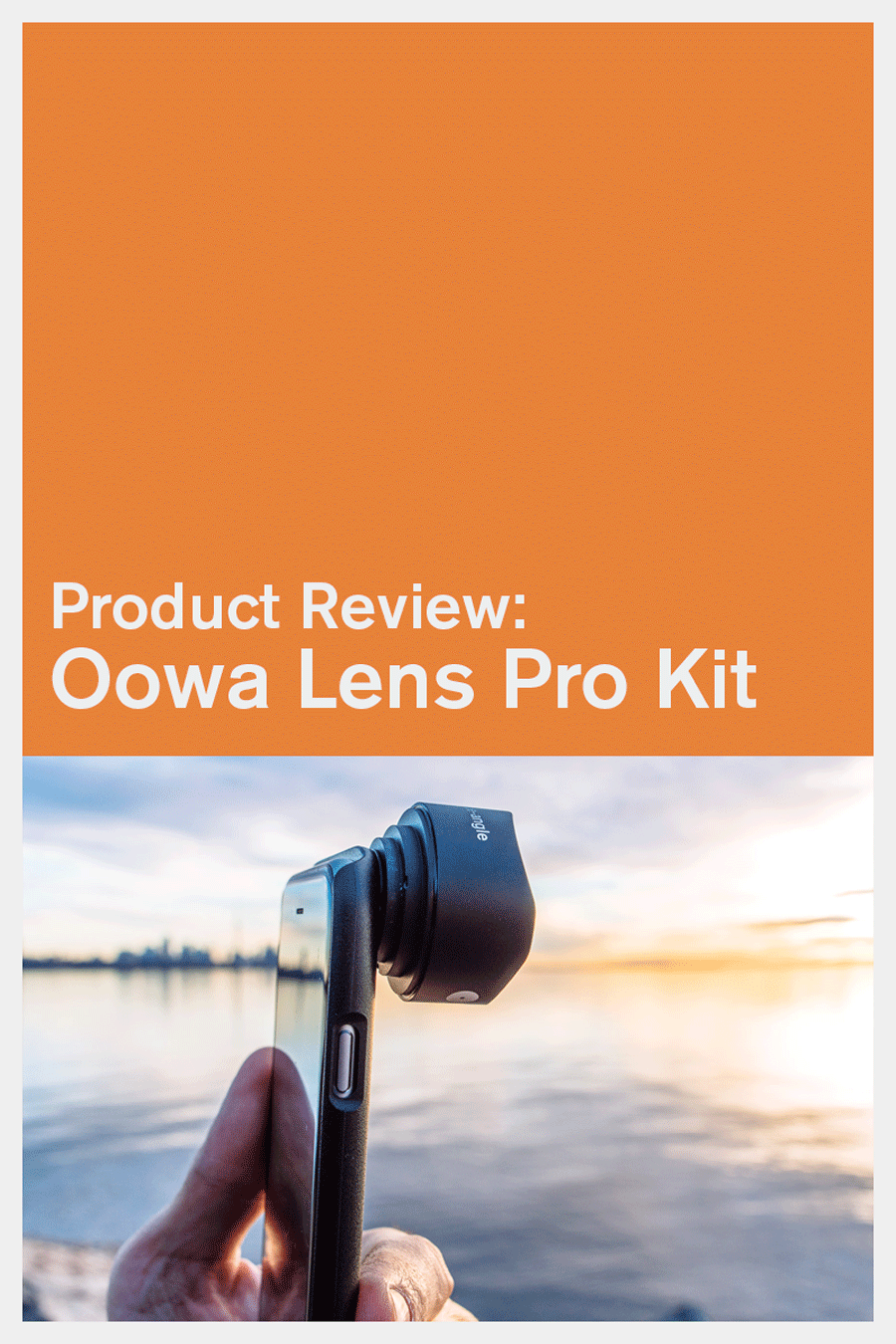 Oowa, started as a Kickstarter campaign, and with their lenses created by DynaOptics Ltd., claims they are “revolutionizing mobile photography with free-form optics.” Free-form optics? Here’s what they say about this, taken directly from their website:

“Our patent-pending, free-form technology is uniquely optimized for translating the image circle onto the iPhone’s rectangular sensor. This results in superior edge-to-edge image quality with no dark corners and no color bleeding. Mobile photography will never be the same again.”

In short, their lenses are optimized to the device’s rectangular sensor by way of optimizing a rectangular portion of the image area of their lenses. This sounds fancy and all, so I was excited when I received an email from them to test out their set of iPhone lenses. Are they really revolutionary though? Let’s find out!

Note: This review isn’t intended to be technical in any way—there will be no studying graphs or charts here. My on-the-field photos are taken and observed as is, giving you real-world examples. While test charts and graphs may prove one set of lenses to be sharper/better than another, seeing things out on the field is how I like to determine the lenses to use for my purposes.

All sample photos are taken with an iPhone 6s Plus. All sample images have been resized for the web. Other than that, they are unedited images as seen from the iPhone camera.

The Oowa set of lenses that were sent to me have a close competitor to them, called Moment—which also started as a Kickstarter campaign. Where I can, I have compared the photos created with Oowa lenses with those made with the Moment set of equivalent lenses. If you’re interested in seeing my review on the Moment set of lenses and cases for my iPhone, you can read the Moment lens and case review here.

The Pro Kit consists of a case for your phone that acts as the adaptor to their lenses: the 15mm wide angle lens, and the 75mm telephoto lens. The telephoto lens also comes with a flare hood, and both lenses come with a lens cap to protect the front glass, and a lens pouch to carry each lens in.

The Oowa case is simple, minimal, and to my surprise, quite comfortable to hold. It’s sleek and smooth design adds minimal bulk to your iPhone, which is always great. The button openings on the case are big enough for you to access the buttons, but I find that the buttons are inset too much to actually be able to switch and/or press the buttons with ease. Perhaps this is just my bulky fingers, but I find the need to use the tips of my fingers to actually make use of the buttons. This isn’t a deal-breaker, but is just a little inconvenient at times.

The case is made of plastic, but seems sturdy enough to withstand low-impact moments. The flat back is actually quite slippery to the touch, so I have had instances where it has easily slipped out of my hands. The purpose of the case is to be able to attach their set of lenses on to the iPhone. This is done through the threaded opening surrounding the camera area. There are no markings or anything, which can be problematic to some as I’ll explain further below.

As a photographer who loves taking landscape photos, I love wide angle lenses. The photos that come out of them pull you into the scene and surround you with beauty. At 15mm, this is much wider than the 18mm wide angle lens I was using with my iPhone. How does this compare with the regular iPhone lens? Let’s see!

You’ll likely notice quite a big difference in terms of field of view. The 15mm is significantly wider than the iPhone’s native lens on the iPhone 6s Plus, as can be seen by the extra trees you see. If we take a look at the corner areas, you’ll see that while the iPhone photo has a relatively decent image quality, the Oowa lens tends to suffer a bit. The finer edges of the branches get blurred—especially at all four corners of the image.

From day 1 I’ve always noticed vignetting and distortion with this lens, as you can see in the photo above. I should mention that Moment just recently came out with a newer version of their wide angle lens, so that may have solved some of the issues that were plaguing this initial version.

Here’s another example where you can see the Oowa 15mm (first image) has slightly better image quality edge-to-edge, compared with the Moment 18mm (second image).

If you look closely, you’ll notice how the image quality from the Moment wide angle lens suffers at all four corners, with some light fall-off. Comparing that with the Oowa 15mm wide angle, I would say the Oowa lens has a slightly better image quality, and next to no vignetting, which is thanks to their free-form optics. Way to go Oowa!

This Oowa telephoto lens zooms, which is 2.5x closer than the standard iPhone lens, can get a bit closer to the subject than my Moment 60mm lens. This is great for when you want to capture the moment but aren’t able to get physically closer. First image is the iPhone version and the second image is the Oowa telephoto version.

Similarly to the initial comparison from above, the image quality of the Oowa 75mm is slightly lower than that of the iPhone 6s Plus native lens. This can be seen primarily around the corners where the branches are all blurred together.

Comparing the same image with the Moment 60mm lens (second photo), I would again agree that the Oowa 75mm (first photo) has a slight advantage with overall better image quality and next to no visible vignetting.

When using the Oowa 75mm lens attachment, I noticed something strange that doesn’t happen with the iPhone nor Moment 60mm lens. Depending on the angle at which I take my photo, the four corners of my image will be significantly blurry. If you look at the image below, it can be seen that a large part of each corner is blurred.

And here too…blurred and coloured corners.

In most cases, I angled the iPhone slightly up from the level position, to see the corner area of my image discoloured and/or blurred. This would likely have to do with the internal lens configuration of the Oowa 75mm but it’s something I would say needs to be fixed in a future version. Given this, I would only be able to use the Oowa 75mm when taking photos level to the horizon.

Here is another example of where this happened, although it may be a little more difficult to tell with all the details. Fortunately this did not happen with the Oowa 15mm wide angle attachment.

Connecting the lenses to the case

This may not sound as important as the quality of the images taken with these lenses, but it’s a functionality issue that in my opinion affects the overall use of the system. I mentioned earlier that there are no markings on the lenses or the case, which makes you wonder, how do you connect the two?

The team at Oowa has created a video on this, which explains that you need to align the vertical tabs seen on the back of each lens, with the top and bottom of the opening on the case. You then simply twist clockwise to attach the lens. In theory this works great. But when you’re out in the field, you may be pressed for time, or completely forget about those two small tabs (which I ended up doing when I first went out with the lenses). When you’re in a rush, the last thing you want to do is to stop, look at the lens and carefully align the tabs to the opening. I would love to be able to just swap and go. Traditional SLR lenses—and even other mobile device lens attachments—have markings on both the body and lens (or case and lens), which act as a simple and quick way to properly attach the lens to the body/case. With these Oowa lenses, I can’t do this without having to look carefully and align.

While this doesn’t affect the quality of the image, I find this to be a little cumbersome and hope they fix this in a future version.

As an alternative, I’ve devised my own way of quickly attaching the lens, as shown above. Align just past the Oowa logo and keep twisting clockwise until the lens locks into place. I’ve had about a 90 percent success rate with this method, and it works more or less with both the wide and telephoto lenses.

I love using lens attachments to expand the photographic ability of my iPhone, but especially appreciate it when these attachments do a fantastic job at retaining image quality. My experience with my first set of lens attachments proved a little disappointing as it suffered from blurred corners and a lot of vignetting. These Oowa set of lenses, however, are a marked improvement over my Moment set of lenses, and thanks to their free-form optics, I am really happy to see that they have done away with vignetting around the corners. The image quality at the corners still do suffer a little, but again, not as much as my Moment lenses.

This strange reflection I got with the 75mm lens, however, is problematic, and I really do wish they fix this in a future version, since this limits the angle in which I can use this lens.

The method of attaching these lenses to the case can also use some improvements so that I don’t have to think about how to go about doing it while out in the field. Every second counts when you’re trying to take photos of sunrises, and I don’t want to miss a moment trying to attach a lens to my camera.

The build quality of these lenses are solid, and I can see them withstanding some heavy use. I’m happy with the image quality coming out of them, but still yearn for the time when we can get very sharp picture quality edge-to-edge.

Disclaimer: These Oowa lenses were sent to me by Oowa for review purposes. Opinions are strictly my own.

Do you have any experience with Oowa lenses, or any other mobile phone lens attachments? Let me know how your experience is in the comments below!

Here’s another set of photos comparing the iPhone lens to the Oowa lenses and the Moment lenses.