As a spiritual symbol of Japan, Mt. Fuji is one of only three sacred mountains of the country, and its tallest at 3,776 meters. Its designation as a UNESCO world heritage site further exemplifies its importance to not only the people of Japan, but to the world as well.

When my wife and I went to Japan in the Spring of 2017, I had the opportunity to capture a widely known event called diamond Fuji—the time when the sun rises behind the apex of Mt. Fuji, creating a sparkle on top, much like a diamond would on top of a ring. The term double diamond Fuji refers to this event, and its reflection caught in a body of water in the foreground. This happens around April 20 and August 20 of every year (give or take a few days) at Lake Tanuki.

Prior to my trip, I did my research and found that one of the most picturesque locations to capture a double diamond Fuji is at Lake Tanuki—a man-made lake made for irrigation purposes. Unfortunately, other than Kyukamura Hotel (pictured below) which sits right on the shores of the lake, there weren’t many places to stay around this area, unless you wanted to camp out in the open.

This hotel books far in advance, and especially during special times like this. We were fortunate enough to get a cabin for two nights during mid-April, as we had booked well in advance. The area around this hotel has some great viewing spots including a public lookout that is located literally right behind the hotel (located to the left of the pathway in the photo below).

If you walk a little further away along a pathway, it will lead you right to an open area where you can enjoy an unobstructed view of Mt. Fuji.

Beyond the opening, you’ll come across a spectacular shoreline with unobstructed views of Mt. Fuji with Lake Tanuki in the foreground. 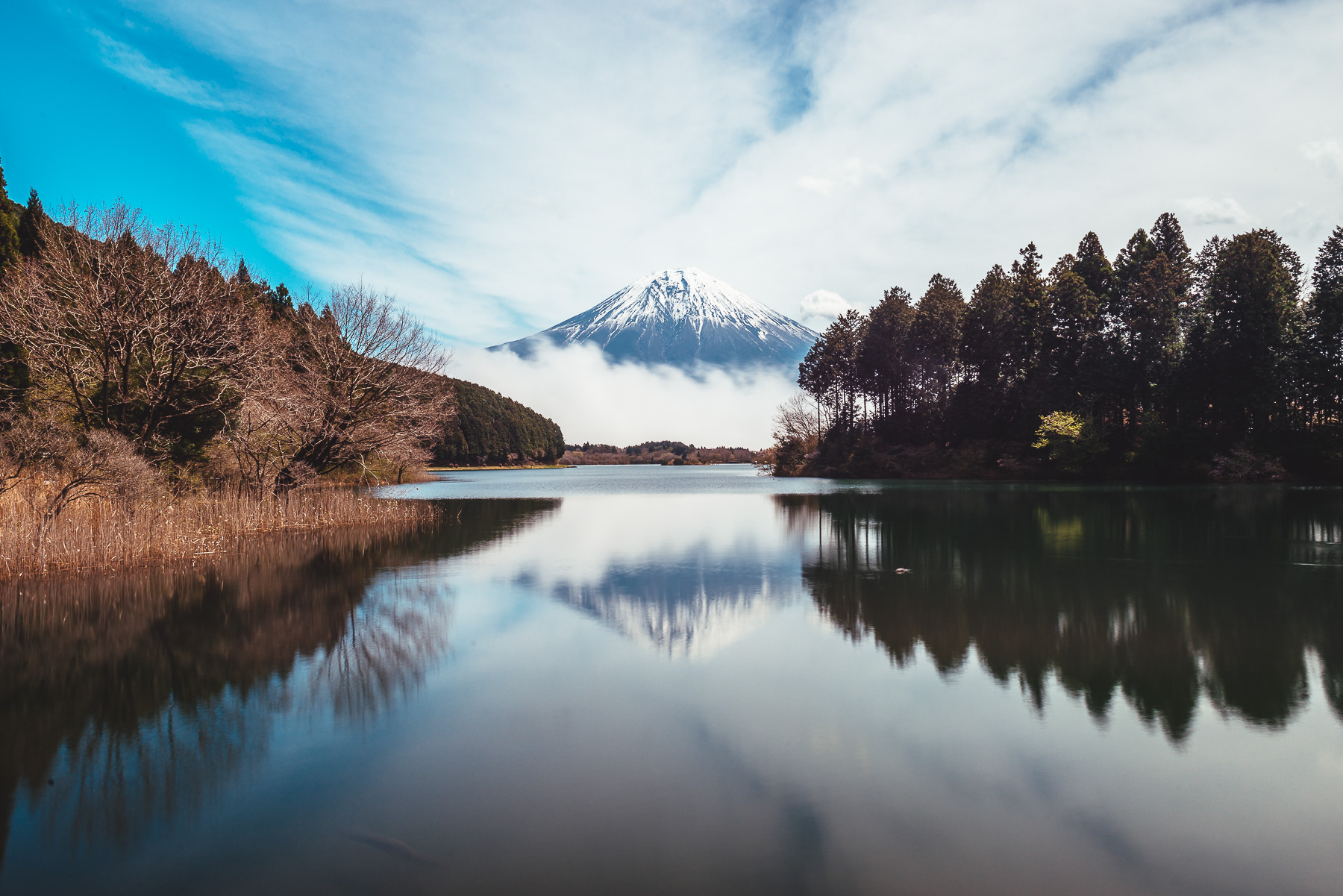 No matter how much planning you do though, there is always one factor that you cannot control: the weather. And unfortunately, the first morning we were there, it was overcast with thick clouds covering Mt. Fuji.

The early morning fog was thick as we walked the pathway along the lake. What was even more interesting was this fog quickly dissipated in front of our eyes in a matter of seconds as the sun came out. It was as if someone had pushed the “sun” button that turned off the fog.

As the fog lifted, so did the clouds—although at a much slower pace. We waited patiently by the lake  for the clouds to move away so that I could get my first glimpse of Mt. Fuji from this location—which was the closest I’ve ever been.

It was at this moment that I felt the sheer raw power of Mt. Fuji, humbling in every way. I now know what people mean when they say that this mountain had moved them spiritually. Its mere presence was enough to put you in your place.

We spent much of the day driving around the area, taking more photographs of Mt. Fuji from various locations, including a sunset view of Mt. Fuji, seen below from the lookout area directly behind the hotel. 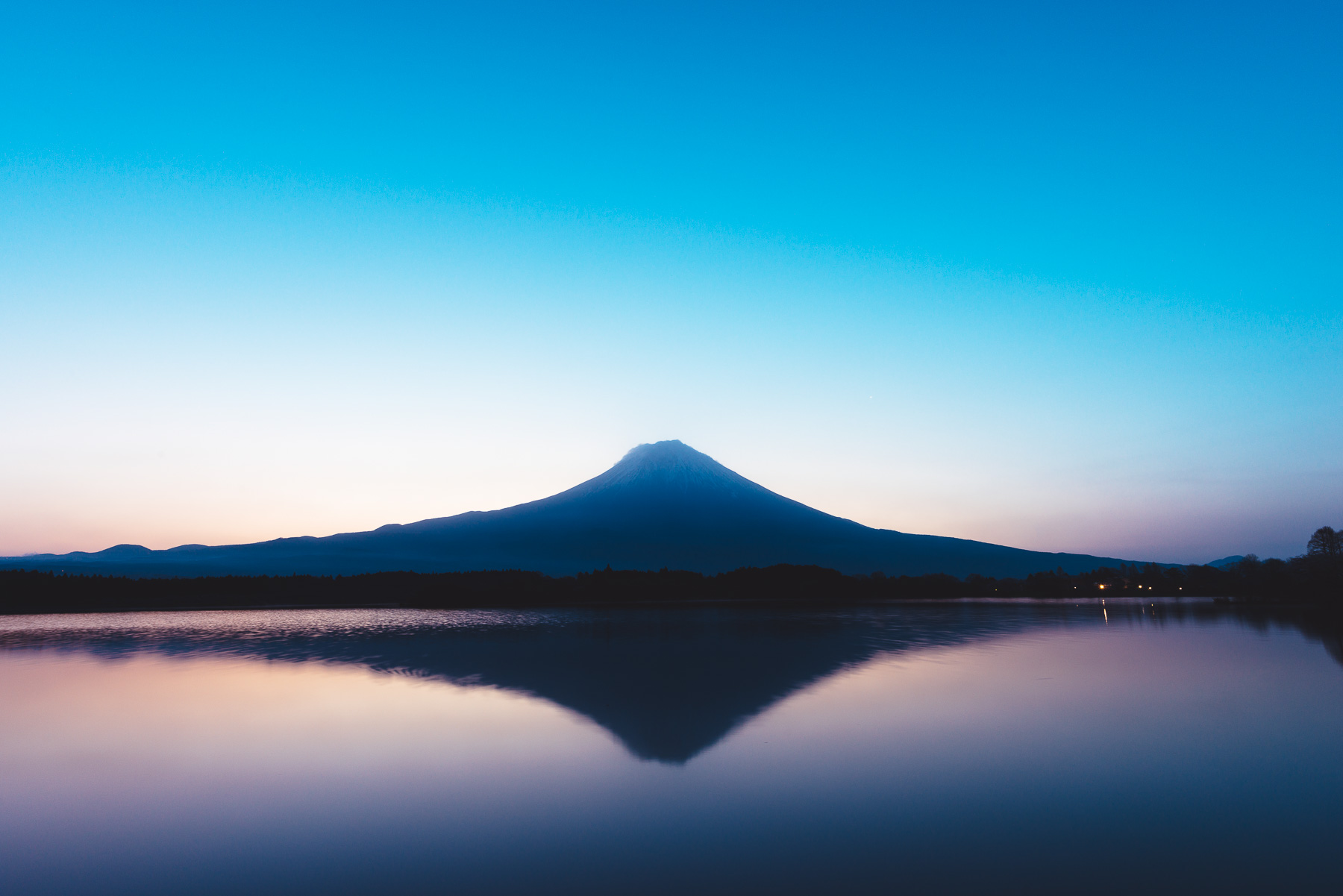 The double diamond Fuji at Lake Tanuki happens only twice a year—in mid April and mid August. So it’s understandable that many photographers want to come and experience this at such a picturesque location. Each night people pay close attention to the weather forecast, trying to see if the morning will be clear. This morning was forecasted to be partly cloudy. My hope was slowly fading away.

The peak morning, or when the sun was to rise directly at the apex of Mt. Fuji, was actually a few days away. The hotel was fully booked the rest of the week so this was the only chance I had to get my photo of a double diamond Fuji.

The sun was set to rise at approximately 6:30am, but you had to be at the location for around 4:30am just to claim your spot along the lookout area, or along the open shoreline.

This morning, we woke up at 4:30am, and made our way to the open area as I wanted an unobstructed view of Mt. Fuji. Waking up to a clear sky, I was excited and hopeful this would be the morning I was waiting for. There were a handful of other photographers lined up along the shores of the lake by that time, all hoping for the same thing.

As time passed by, so did a few clouds. They started forming directly at the apex of Mt. Fuji, forming a “hat” so-to-speak. This lenticular cloud formation was interesting, but not the look we were all waiting for.

A few minutes later and the reflection from the sun really brought out some colours on the clouds.

The steam directly above the lake made for some pretty photos too, so I made sure to take some photos of them as well.

As time passed by those stubborn clouds were still there, as if trapped by the peak of the mountain. The colours became more intense than ever, making this moment quite striking. You could hear the shutters of every other photographer go non-stop.

These clouds lingered there for what seemed to be like forever. Would these clouds move away in time? At this point, it didn’t look like it at all.

The sun had risen above the horizon by this point, and was making its way up behind Mt. Fuji. With the clouds still lingering, you can see the sun rays peaking through the breaks in the clouds. By this point, everyone was starting to pack up and leave, as they knew this morning wasn’t the morning for a double diamond Fuji.

I started walking back and took a few more photos from the lookout area. There were even more clouds now than when I first arrived!

We were scheduled to leave the area this day and head back to Tokyo. Dissatisfied with the outcome from these two mornings though, and the fact that it was unlikely that we would ever be back in this area again during the double diamond Fuji period, we decided to look for another location to stay in.

We scouted around and found a small guest house about a 20-25min. drive away from Lake Tanuki. It offered a modest room, a traditional Japanese dinner and breakfast, and had rooms filled with framed photos of diamond Fuji and double diamond Fuji.

The owners of this guest house always housed other photographers during this time. There was one other guest besides us, also a photographer, hoping to capture the same thing the next morning.

With the peak getting nearer and nearer, and the weather forecasted to be clear, things were looking spot on for morning 3. We woke up at 3:30am, got ready, and headed out the door by 4am. The other photographer had already left before us.

We arrived around 4:25am, with throngs of other photographers lined up along the open shoreline—way more than the prior morning.

You could tell this morning’s air was much clearer, so we were all much more optimistic.

By 5:03am, the colours started to show starting from the light blue and purples.

And moving to the vibrant oranges and yellows by about 5:14am.

And by about 5:57am, you could see the bright white glow of the ball of sun behind the mountain.

You could hear the shutter snapping away from everyone else along the shoreline. Everyone was after that one perfect shot of double diamond Fuji. At 6:08am, my moment came when I was able to capture the sun peaking above the apex of Mt. Fuji, making that starburst. It was the perfect capture that morning, which even included some clouds in the sky.

Each exposure had to be short, otherwise it would blow out the sun and the starburst, so there was no time for long exposures to smooth out the water. After taking a few more photos, I called it a morning at 6:11am, which by this time about half of the photographers were already packed up and making their way back to their cars.

We made our way back to the hotel for that traditional breakfast we were so yearning for.

The double diamond Fuji is visible in many other areas surrounding Mt. Fuji. Depending on which direction you are looking at, this phenomenon will occur at different times of the year. Whether similar things happen at these other locations I can only guess, but I encourage you to do some research to find out if you ever go.

Hopefully this post will give you a better idea of what to expect though, when you’re out looking for your own photo of double diamond Fuji from Lake Tanuki.