Advances in smartphone technology has been phenomenal over the last few years. From larger screens to dual lenses on the back, every manufacturer from Samsung to Apple to LG has been pulling out all the stops to attract new customers and gain more market share. So wouldn’t you think it’s crazy for another manufacturer to try and compete with the already well-established brands? Why did an unknown manufacturer like Huawei enter the very competitive North American mobile phone market now of all times? While Huawei may not be a familiar name to folks living here in North America, it is actually one of the top three largest manufacturers of mobile phones in the world. That’s why. 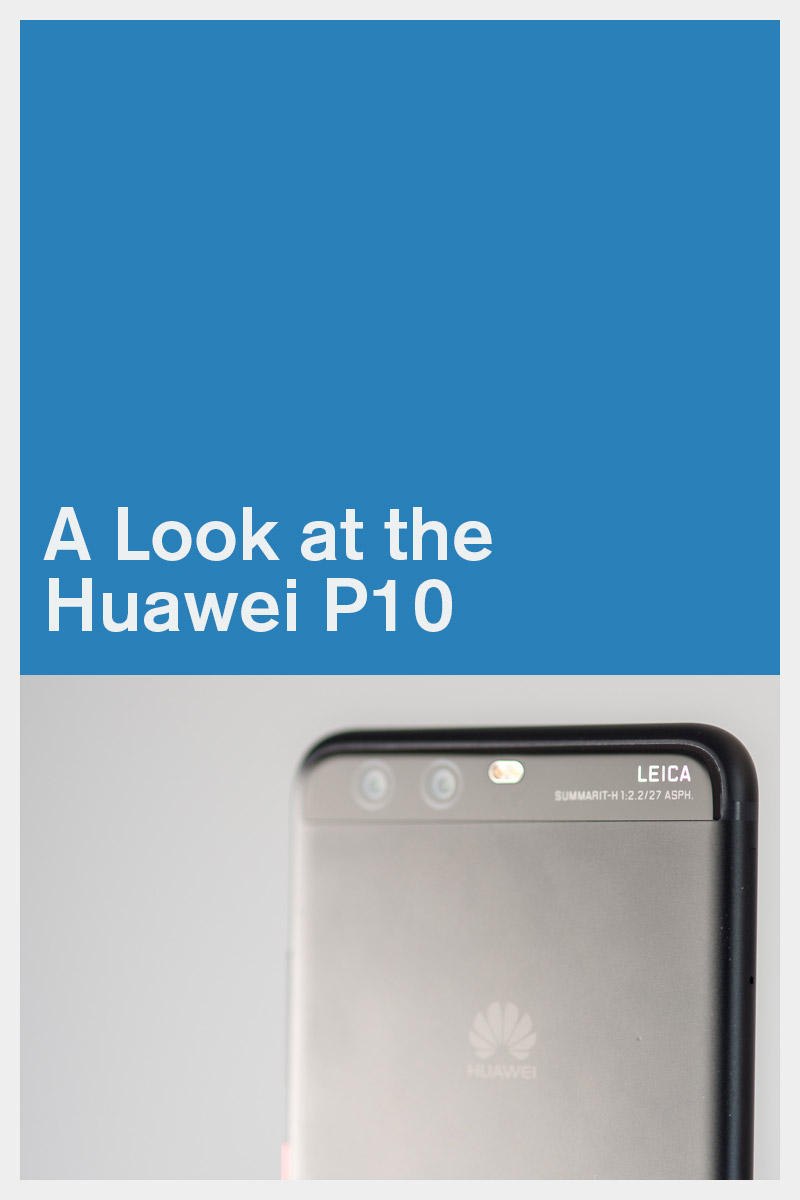 Their latest flagship phone to hit the North American market is the Huawei P10. This beauty of a phone sports a 5.1″ IPS-NEO LCD capacitive touchscreen, 1080 x 1920 pixel resolution, their Kirin 960 chipset, and the feature that I find the most attractive: dual Leica lenses on the back (20mp and 12mp f/2.2 lenses with optical image stabilization).

Before I delve into the details of the camera and lenses, I should let you know that this review isn’t meant to be technical by any means. I won’t go into details about the phone’s specifications, the Android 7.0 (Nougat) operating system it came installed with, nor anything else apart from the camera and lenses that I was most intrigued about.

This demo unit was provided to me by Bell Canada and Huawei Canada as I worked with them on a social media campaign over on Instagram. You can check out the video they made of me here. This blog post wasn’t a requirement of the social media campaign, so I’m really just doing this for my own purpose. Also, I did give back the phone, so I no longer have it in possession unfortunately.

So now that we have that taken care of, let’s begin!

At first glance it may look like just an ordinary smart phone, but when you feel it in your hands, you’ll notice something a little different about it. Before I was even told about it, I noticed the smooth feel and finish to the matte look of the black version of the phone that I received. I was told the blue micro-textured phone feels even better in your hands!

The Huawei P10 sports two Leica lenses that are optically stabilized on the back: One 20mp monochrome optic and another 12mp colour optic, both at f/2.2. Combined, they give you a lot of options when taking photos with it. The front facing camera is an 8mp f/1.9. So what does this mean? According to Huawei, it provides better low-light capabilities, clearer images, and great colour rendition.

I love testing the limits of camera phones, so I took the camera and shot several shots during sunrise and sunset hours, where light is low. Let’s see how it did, compared to my iPhone 6s Plus, and my Nikon D800.

The Gallery app on the Huawei P10 is your standard photo browser. One thing I did notice was that it was not able to render RAW files very well. For one reason or another, any photos that were taken in RAW (dng format), were slightly blurred when seen in the Gallery app.

At first, I thought to myself that I was taking way too many blurry shots, and started deleting them from the app—only to realize later on that I was actually deleting the RAW files, which were perfectly in focus when viewed in other editing apps. This needs to be addressed in an update, if it hasn’t been already.

The Huawei P10 comes with several shooting modes built in right inside their native camera app. Now that’s convenient since you don’t need multiple apps to do multiple things, much like you need with the iPhone. A look at all the options reveals several modes including monochrome, Time Lapse, Long Exposure, and more. As a sucker for long exposures, I just had to test this out. I will note that one of the disadvantages of using any of these additional shooting modes is that the camera will no longer capture these images in RAW format. As soon as you use these modes, it will automatically create a jpg for you.

Long exposures on mobile phones are done quite differently from dSLRs. The exposure time is actually not the time the sensor is exposed like a dSLR, but is rather the total time of the video it takes. The camera app then super-imposes the multiple frames it caught within the video, into the still photo to mimic what a traditional dSLR creates. This has some pros and cons to it, like anything else.

The advantage is that you will likely not get many over-exposed images, much like you may with a dSLR. Any stationary objects will be sharp, while any moving objects will be detected by the camera and appropriately treated to mimic a long exposure. This actually works really well—I tested this out when I went camping and I was amazed at the results.

And the same photo taken with my Nikon D800, edited in Lightroom, which changes the tones quite a bit from the Huawei P10 version.

In Low-light mode, the camera will take multiple photos in a span of 30 seconds. It then combines all photos to retain details in the low-light areas, and produces one solid image with some impressive results.

And as a reference, here’s a photo taken at the same time without the use of the low-light mode, also taken with the Huawei P10. You’ll notice there is a lot more grain visible in the photo.

And here’s a photo taken at the same time with my Nikon D800, and edited in Lightroom with my standard editing. It’s not as sharp as the low-light version taken on the Huawei P10, but that can be changed in Lightroom.

Here’s another set taken with the Lone Exposure mode on the Huawei P10, compared to one I took with the Nikon D800. I find that a lot of noise reduction happens on these images from the P10, which smooths out much of the detail in select areas.

I don’t have this version taken with an iPhone 6s Plus, but I can say that it would be very difficult to get similar results to what I got from the native camera on the Huawei P10.

Another example of how sharp images turn out on the Huawei P10.

Overall I really liked the camera portion of the Huawei P10. I can’t attest to the phone’s capabilities as a phone since I rarely used it as such. But with advanced shootings modes, RAW capabilities, and two dual Leica lenses, this camera packs a punch and is a great contender to other mobile phones out in the market right now.

While the standard HD screen resolution is nothing to write home about, it is sufficient for everyday use, and I don’t find it to be too much of a negative aspect for this phone. The screen is bright enough to use on a sunny day outside, and the slim bezel looks great—although I will admit that my fingers had inadvertently touched the screen on the side on more than one occasion.

The Huawei P10 is a great phone with an exceptional camera and lenses. But I find that even with this, it’s probably not enough for me to retire my iPhone 6s Plus for this particular model. Already heavily invested in the Apple ecosystem with an iMac, a Macbook Pro, and an iPad, the phone that takes me away from all of this will have to be truly special.

For those that are not already invested in any particular ecosystem though, I would definitely recommend taking a closer look at this phone for your needs.